Alex's imperfect English - in letters to Jonathan and sections of a novel based on the journey - form two of the book's three narrative strands. Don't try to read them at night while someone else is sleeping unless your relationship can survive frequent wakings by deranged laughter. The trick is that the translator, using a thesaurus to enrich his vocabulary, sees no distinction between common, demotic and poetic words.


Or, as Alex puts it: "I fatigued the thesaurus you presented me, as you counseled me to, when my words appeared petite, or not befitting. The firm breasts of his fantasy woman are described as an "unmalleable bosom". The guide dog is a "Seeing Eye bitch". Hearing his little brother crying in his sleep, Alex tries to "counterfeit that I am reposing".

This technique might easily be dismissed as Benny Hill goes to Harvard - laughing at the mangling of a second language - but Alex gathers dignity with every page. Safran Foer is transmitting linguistically a message that lesser writers might have conveyed editorially: the unreliability of reconstructing foreign events.

What Alex might call his fabric-lughole for English represents and echoes Safran Foer's distance from the history he is trying to see. In this way, the mistranslation tactic recalls Kurt Vonnegut's Slaughterhouse-5, in which another terrible family memory from the second world war - the bombing of Dresden - is approached, with similarly brilliant obliqueness, through science fiction.

Requiring the reader to become a translator - stopping to guess the word that Alex should have chosen - the off-centre sentences also make standard observations affectingly fresh, as when Alex notices that Jonathan is weeping: "I observed that the hero had small rivers descending his face, and I wanted to put my hand on his face, to be architecture for him.

The problem with high-concept framing devices in fiction is that they can make readers impatient with the more conventional sections. In the non-Alex stretches of the book, Safran Foer recreates scenes from the lives of his Ukrainian ancestors between and courtships, marriages, an accident and, eventually, salvation. 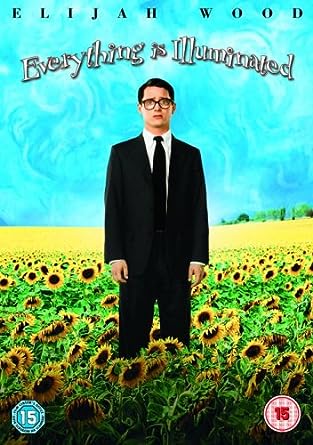 Writing here in his very best American, Safran Foer never quite matches the thrill of Alex's failed English, but these sections contain some glittering observations in the style of magical realism, as when the writer imagines a bad smell "entering the mouths of the sleeping for long enough to misdirect their dreams before exiting with the next snore". Also demonstrating that the writer can target hearts as well as heads is the detail, when the characters reach Trachinbrod, of wedding rings, money and pictures buried in the earth, all these "Jewish things" interred as the Nazis advance.

Attempting to signal sincerity, Alex signs off his letters "guilelessly". It's hard to get through the first chapters of ''Everything Is Illuminated. For me this difficulty was compounded by the fact that I was reading the novel on a trans-Atlantic flight.

My inappropriate laughter the film being shown on the plane was sad, or at least melodramatic was clearly making several of my fellow passengers wonder if my behavior was the sort that, these days, requires that the flight attendants be notified at once. And even as I eyed the phone in the console beside my seat, I realized that indulging the temptation to call the folks back home and tell them about this wonderful first novel might cost far more than I was likely to earn from writing this review.

So let me tell the review's readers, instead, and quote the book's opening passage, Jonathan Safran Foer's exhilaratingly demented version of ''Call me Ishmael'':. But all of my many friends dub me Alex, because that is a more flaccid-to-utter version of my legal name.

Mother dubs me Alexi-stop-spleening-me! If you want to know why I am always spleening her, it is because I am always elsewhere with friends, and disseminating so much currency, and performing so many things that can spleen a mother. I have many many girls, believe me, and they all have a different name for me. One dubs me Baby, not because I am a baby, but because she attends to me. Another dubs me All Night.

Do you want to know why? I have a miniature brother who dubs me Alli. I do not dig this name very much, but I dig him very much, so O. As for his name, it is Little Igor, but Father dubs him Clumsy One, because he is always promenading into things.

Review of EVerYTHInG IS ILLumInaTeD: A Novel by Jonathan Safran Foer

It was only four days previous that he made his eye blue from a mismanagement with a brick wall. Not since Anthony Burgess's novel ''A Clockwork Orange'' has the English language been simultaneously mauled and energized with such brilliance and such brio. But if Burgess's hero was an enraged, disaffected English youth bottom-feeding off the detritus of Soviet culture, Foer's narrator is an actual Russian or more accurately, a Ukrainian who could hardly be more affable, more engaged or more enchanted by everything American, from Michael Jackson and ''the greatest of all documentary movies, 'The Making of ''Thriller,'' ' '' to the career of the porn star John Holmes to the ''many good schools for accounting,'' one of which Alex dreams of attending.

Jonathan Safran Foer interview on "Everything is Illuminated" (2002)

Alex speaks English like someone who has taught himself by painstakingly translating a really abysmal novel with the help of a badly outdated dictionary. In his idiosyncratic and persuasively consistent lingo, to sleep is to ''manufacture Z's,'' to have sex is ''be carnal,'' good is ''premium,'' nearby is ''proximal,'' difficult is ''rigid,'' and a certain downtown Manhattan neighborhood is, logically, ''Greenwich Shtetl.

No matter. Alex is ''fluid'' enough to be dragooned into working as a translator for Heritage Touring, the travel agency at which his abusive father arranges trips for American Jews ''who have cravings to leave that ennobled country America and visit humble towns in Poland and the Ukraine. After a first encounter that could hardly be funnier or more unpromising, Alex and ''Jon-fen'' set out across the ''totally awesome former Soviet republic,'' together with Alex's grandfather who, despite a case of psychosomatic blindness, has been enlisted as their driver and along with their overly amorous and malodorous dog, named Sammy Davis Jr.